This article is available also in Italian

Three exhibitions at the same time are open at the Galleria del Cembalo, lasting until February 13th, to tell about almost one century of art, history, photography.

Rozalija Rabinovič (Kiev, 1895 – Mosca, 1988) opens the trilogy. Painter, follower (o pupil) of the VChUTEMAS and original interpreter of the propaganda under Stalin in the 1930s. Follows Sergei Vasiliev (Čeljabinsk, 1937), reference name of photojournalism in the east side of the wall, five times winner of the World Press Photo, author of an exhaustive portrait of the daily living in the beginning of the thaw at the end of the Cold War, showing prisoners and their foolish tattoos, or the soft and spotless bodies of the women in the sauna or even at the top of the emotion of their delivery in the water. To close the exhibition, the motionless images by Danila Tkachenko (Moscow, 1989), enfant prodige of Russian photography, who went shooting in many off-limits zones of the former Soviet Union, military and industrial, symbol of the cold war and of the most ambitious regime technocracy.

Absolutely independent one another from artistic point of view, Rozalija Rabinovič, Sergei Vasiliev and Danila Tkachenko pass the baton to recount the seasons of an extraordinary country and of his ideology, a country which is now looking back to its past like never before.

Rozalija Rabinovič (Kiev, 1985 – Moscow, 1988) is one of the most original and less known interpreter of the Soviet propaganda. After the first European appearance at the Biffi Gallery in Piacenza, a selection of about fifty drawings, realized between 1930 and 1938, is shown in Rome, under the flamboyant light of the Soviet Red Star, to tell about myths, symbols and protagonists of the Stalin era, in the passage from the most revolutionary avant-garde to the full development of the Soviet Realism. In the primary colours red and black, and in a sacred abundance of gold, Rozalija Rabinovič paints a world in construction and Stroim! (let’s build!) is the keyword that echoes between smokestacks, running trains, diggers, zeppelins, airplanes flying by the steeples of the Kremlin.

In the creative project of a world with a “bright future” everyone is involved: homeland fathers, young conscripts, and the heroes, from the workmen to kolkhoz women, from the aviators to the new soviet women. In a magnificent scenic design, in a heroic glorification of the geometry, the smokestacks rise in the sky, Lenin shows the way, the airplanes and the zeppelins fly all over Soviet Union, Stalin announces the quinquennial plans, the pioneers play the drums, the brave parachutists launch themselves, the tractors and the diggers conquer new lands, and the locomotives, symbol of the machinery culture, link Moscow to Leningrad in only seven hours.

Biography - Rozalija Rabinovič
These impressive deeds of muscles and gears are sung out by a delicate, shy woman, sister of Isaac Rabinovič, one of the most important set designer of the Bolshoi. Together they study in Kiev in the ateliers of Alexander Murashko and of Aleksandra Ekster (1882 – 1949). Together they arrive in Moscow on the wave of the Revolution. In Moscow Rozalija is a student of Robert Falk’s painting class in the prestigious VChUTEMAS school, a famous school of art of the 1920s, somewhat parallel to the German Bauhaus. Under her brother’s wing, who protects her but also hides her talent, Rozalija realizes a series of drawings for fabrics, propaganda panels, posters for the GUM stores, and furthermore sketches for the party diplomas and awards. In 1933 she is teaching in the “Central Art House for Children Education” and the drawings of her students are shown at Paris Expo in 1937 and at the World’s Fair of New York in 1939.

After the War, in 1948, she participates to the construction of the Soviet Palace. Since 1950 she teaches in the painting atelier for children in the “Architecture House of Moscow”. After Stalin’s death, she works on more sentimental and intimate themes. The red colour disappears and a palette of faint and delicate colours arises.

At the end of the Stalin period, the propaganda drawings are kept hidden by the artist in her own house, in the Komunalka at n. 17 Ulitsa Staraya, in Moscow, where Rozalija Rabinovič has been living since 1929 until the day of her passing, on February 4th 1988, being 92 years old. Only after her death, the drawings from the ’30 came back to light fortuitously, from one of her nephew’s hands.

In the inside of the USSR. The inner gaze

He looked inside, without stumble. In a banja, the Russian sauna, telling the joyful intimacy of a group of women. In a swimming-pool, following the emotion of a delivery in the water or the elegant vaults of mermaid girls. In a prison, where the detained show with pride their tattoos. Sergei Vasiliev, born in the 1937 in Čeljabinsk, small city under the Ural Mountains, is one of the most famous photojournalists of the Soviet era, having worked for thirty years in the local newspaper and having a long lasting experience in the jails. Since 1948 he worked with Danzig Baldaev in the tattoos classification and in decoding their meaning, often focused and addressed against the authorities.

Every drawing speaks about killing, theft, drug dealing. Every symbol is a military grade to identify boss and subdued. But besides the backs, the arms, the legs, the breasts, entirely covered by sacred and profane figures – from the Church of St. Basil to the holy triad Marx, Engels and Lenin, from Saint Michael and the dragon to Alexander Nevsky – Vasiliev almost touched with his camera even the skin of the women, extremely soft and white as the snow. The scene is in an inner space, not a prison cell, but a sauna in a winter morning. Outside, the temperature is many degrees below zero, inside is the heat of naked and flourishing bodies in the magnificence of youth. Not a minimum embarrassment at the sight of the photographer. Everything looks natural, sensual, the sweat sliding on the skin, laughing, intimacy, and finally the water refreshing the bodies. Another step and the women get into the water, one with the newborn baby, one other swimming as in the open water of the sea. It’s all about in the beginning of the ’70s. Six years before, in 1964, Čeljabinsk registered the first nuclear disaster, similar to the one in Cernobyl. Nobody knows anything about it. This time the wind blows eastward pushing the radiation clouds beyond the Ural Mountains. Instead, both the described reportages, Banja and Nascita, these images of infinite beauty, reach the west in 1977 and in 1981, winning the world Press Photo. When the USSR falls, the photos of the tattoos appear, published in the volumes of Russian Criminal Tattoo, Fuel Editions. The Russians have written their stories on the skin, which is the only private property in the Soviet time, stories of violence, protest and infinite beauty.

The images come from the important photographic collection owned by Francesco Bigazzi, journalist and writer, news correspondent in the USSR since 1985 and director of Ansa at that time. He is one of the most expert on the political dissent in East Europe and he dedicated many volumes to this argument.

Sergei Vasiliev – Prisoner in a Russian prison (From a reportage on tattoos of prisoners in the prisons of Chelyabinsk, Nizhny Tagil, Perm and San Pietroburgo) 1989-1993

Buildings, hardware, monuments that were the symbols of an utopia and today are the debris of a world power who wanted to conquer the whole world, from the subsoil to the space. Danila Tkachenko (Moscow, 1989) – a very young and extraordinary talent of Russian photography – traveled for three years across his Country, from Kazakistan to Bulgaria or to the Arctic Polar Circle, looking for those Restricted Areas which remained secret from the end of the World War to the fall of the Soviet Union, undetected even on geographic maps. A biographic fact steers Tkachenko towards this impressive documentary research. His grand mother lives in Čeljabinsk, a few kilometers from another city, identical by name, but closed and invisible until 1994: Čeljabinsk-40.

Here the first Soviet nuclear bomb was created and in this area in 1964 happened to be one of the most dreadful nuclear disasters of all times, comparable to the one in Chernobyl. The fact was completely put down. The same silence, the same layer of mystery and dread, in Danila’s photos becomes a white mantle of untouched snow. What is left of an empire which sacrificed every richness and millions of lives in the name of technocracy? The answer of a boy born at the time of the Wall’s fall and a few months before the end of the Soviet Union is in these magnificent images, which in 2015 encountered enthusiastic judgments by the boards of the European Publishers Award for Photography, 30 under 30 Magnum Photos, Emerging Photographer Fund Grant, Foam Talent, CENTER Choice Awards, and lacritique.org Award.

Framed by an extremely long ideological winter, there appear the relics of the laboratories of a small scientific town close to the North Pole, specialized in biological research, the skeleton of an airplane, the famous VVA14 with vertical take-off, existing in only two samples, and furthermore a parabolic antenna for interplanetary communications; and again the empty buildings of a city where the rockets were built, definitely abandoned in 1992, and besides, at the minimum scale, a simple iron pole (beam) in the frozen tundra to show where extremely powerful bombs exploded, thousand meters deep underground. Last, as if the chill of the cold war and of the atomic threat had blocked any form of life, there appears in the snow the monument dedicated to the workmen of a nuclear plant. Everything is abandoned. Only debris on the white background are left in the place of progress and of the blind faith in its achievements. “And all of this is true for any ideology and at any latitude”, explains the photographer.

After a long trip to India he develops a passion for photography and attend a course at the Rodchenko Moscow School of Photography and Multimedia. His first work, Escape, dedicated to hermits in the wild areas of Russia, receives remarkable appreciation from the international committees and is published in 2014 by Peperoni Books.

In February 2016 the volume Restricted Areas will be published in Italy by Peliti Associati, promoter of the European Publishers Book Award. 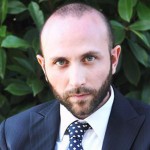